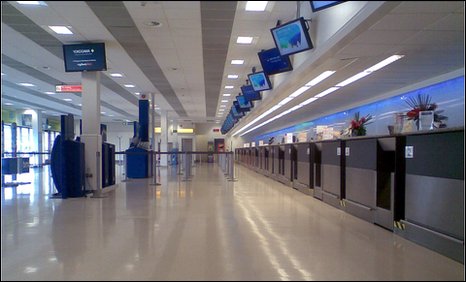 Aberdeen International Airport (IATA: ABZ, ICAO: EGPD) is an international airport, located at Dyce, a suburb of Aberdeen, Scotland, approximately 5 nautical miles (9.3 km; 5.8 mi) northwest of Aberdeen city centre. Over 3.3 million passengers used the airport in 2012, an increase of 8.0% compared with 2011 and just short of the airport’s all-time high in 2007 of 3.4 million.

The Aberdeen Airport is owned and operated by Heathrow Airport Holdings, which also owns and operates three other UK airports, and is itself owned by FGP TopCo Limited, an international consortium, which includes Caisse de dépôt et placement du Québec and GIC Special Investments, that is led by the Spanish Ferrovial Group.

Aberdeen Airport is a base for BMI Regional and Eastern Airways. The airport also serves as the main heliport for the Scottish offshore oil industry. With the utilisation of newer aircraft, helicopters can reach northern most platforms on both the East and west of Shetland areas. However, helicopters frequently use Wick, Kirkwall, Scatsa and Sumburgh for refuelling stops.

ATMs / Cash Machines – There are five ATMS that dispense Pounds Sterling, Euros and Dollars. You can find them before and after security.
Baggage Trolleys – £1 or 1 Euro which will be refunded upon return.
Car Rentals – Alamo • Avis • Enterprise • Europcar. Location: Arrivals Area.
Children’s Play Area – Locations: Airside at Gates 1 and 10.
Food / Restaurants – There are food and beverage concessions available at the Aberdeen Airport (airside and landside).
Information Desk – Location: Main Terminal, opposite the Domestic Baggage Claim.
Luggage Storage / Lockers – Bags may be stored at the left luggage desk, located in the check-in area. Rate: £8 per item per day. Hours: open 24 hours.
Mobile Charging – Two mobile charging units can be be found airside, within the lower level departure lounge, Gate 1 & 4.
Showers – There are no showers at the airport.
Smoking – Smoking Shelters can found directly outside the main terminal building and within the Granite Beer City Garden.
Viewing Facility – To watch take-offs and landings, head over to the Short Stay Car Park 2.
Internet: Free WiFi is available at Aberdeen Airport. Connect to the ‘BT Openzone’ network. if you do not have a mobile device, there are internet stations inside Costa before security, in the domestic baggage reclaim, and at Gates 1 & 5 after security. A fee will apply.

Airport opening hours:
Opens at 04:00, or two hours before the first departure, and closes after the last arrival. Overnight stays in the terminal are not permitted.

Details about this review
0 people like this
Airports, Europe
AberdeenDyceScotlandUnited Kingdom

Isle of Skye Airport Reviews
Be the first to comment!
Leave a reply »