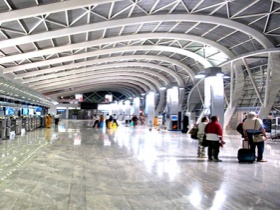 Agra Airport (Hindi: आगरा हवाईअड्डा, Urdu: آ گرہ ہوائی اڈا‎) aka Kheria Air Force Station (IATA: AGR, ICAO: VIAG), is a military airbase and public airport serving the city of Agra, in the state of Uttar Pradesh, India. The air force station is one of the largest airbases of the Indian Air Force (IAF) and has been synonymous with the Taj Mahal for over half a century. On 15 August 2007, the airbase celebrated its sixtieth anniversary. The Airbase was also featured in the 2013 Walt Disney Pictures movie – Planes as a pit stop for the Wings Across The World race.

A new greenfield international airport is proposed for Agra in a bid to give required fillip to tourism in Uttar Pradesh, Taj international airport project at Agra would be implemented in right earnest with the state government according top priority to this project as Taj Mahal is one of the most visited tourist spots in the world. Consortium of Rites Ltd and KPMG Advisory Services Pvt Ltd, the selected consultants for this project, made a detailed presentation to Infrastructure and Industrial Development Commissioner(IIDC), Anil Kumar Gupta on the future course of action.

Details about this review
0 people like this
Airports, Asia
AgraIndiaUttar Pradesh

Top 5 Luxury Hotels in Agra
Be the first to comment!
Leave a reply »