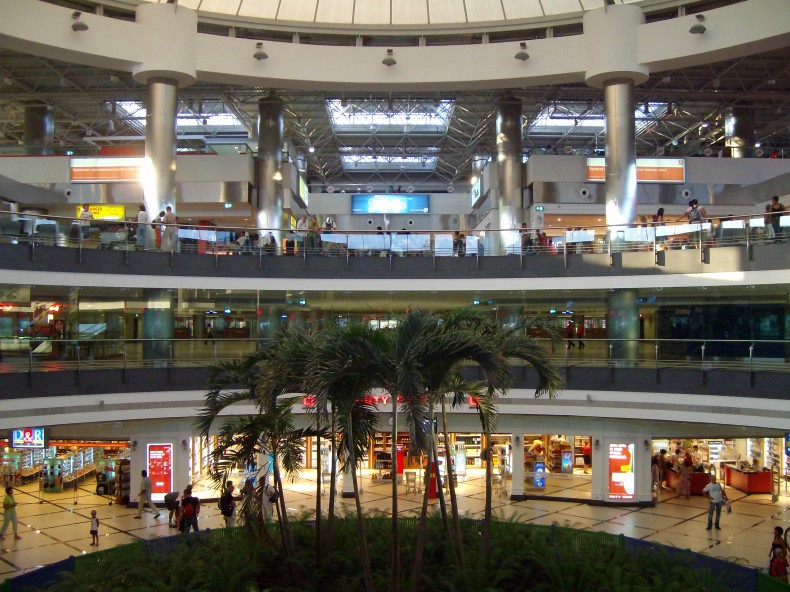 The Antalya Airport was built to accommodate the millions of passengers who come to Turkey’s Mediterranean beaches in summer. It handled 25 million passengers in 2011, more than 20 million of which were international passengers. The airport has two international terminals and one domestic terminal. Based on the projection from data from peak months (e.g. August 2009), it currently has an estimated capacity of accommodating up to 35 million passengers/year, theoretically. The opening of Alanya Gazipaşa Airport between Anamur and Alanya, which is about 100 km (62 mi) to the east of AYT, might ease the airport’s traffic in the future.

Antalya Airport is one of the major airports on the Southwest of Turkey, the others being Bodrum and Dalaman.

ATMs / Cash Machines – There are several ATMs located in Terminal 1 and the Domestic Terminal
Baggage Trolleys – Free of charge
Car Rentals – Avis • Budget • Europcar • Filo Rent • Hertz • National. Location: Arrivals Hall.
Food – There are a few concessions available landside, but more are airside. Many seem to be open 24 hours, so if you are trying to find something to eat or drink before or after security you should no problems.
Information Desks – Located in the Arrival and Departure Halls of each of the three terminals. The agents speak Turkish, English, German and Russian.
Kid’s Playground – Location: Airside near the gates.
Luggage Storage / Lockers – There are lockers located in Terminal 1, Arrival Hall of Domestic Terminal.
Prayer Rooms – There are currently 4 mosques. In International Terminal 1, the mosque is located at the end of the reception corridor. In International Terminal 2, there is one mosque landside in the departures hall (across from the Garanti Bank) and a second mosque after passport control. I have no information on the 4th location. Hours: open 24 hours
Showers – There are no showers at this airport.
Smoking – Smoking is not permitted inside the terminals. There is a smoking terrace in Terminal 2, airside.
Internet: Free WiFi is available at Antalya Airport in the CIP Terminal • VIP Terminal • Domestic terminal at the Via Pub and Via Cafe • Terminal 2 at Simit Sarayi.

Details about this review
0 people like this
Airports, Europe
AntalyaTurkey

Diyarbakır Airport Reviews
Be the first to comment!
Leave a reply »