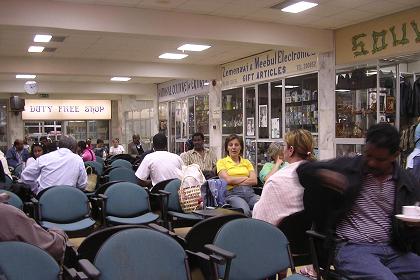 Asmara International Airport has severe capacity restrictions, due to its small terminal, short runway and 1.5 mile altitude. This means that large jet aircraft (like an A380, MD-11 or 747) cannot fly to the airport. Aircraft of this size would need to use the Massawa International Airport, on the Eritrean coast. The Asmara airport was created in 1922, the first such facility to be opened in Italian Eritrea. It served as the main military airport of the Italians. In the mid-1930s, the airport began offering civilian and commercial flights.

In 1935 was started a regular Asmara-Assab-Mogadishu commercial route, with Caproni 133 of the Italian Ala Littoria, that in 13 flight-hours connected the airport of Mogadisciu to Eritrea’s capital. The aircraft had a maximal capacity of 18 passengers, which at the time was a record. In 1936, Ala Littoria launched an intercontinental connection between Mogadishu-Asmara-Khartoum-Cairo-Tripoli and Rome.

The voyage lasted nearly four days and was one of the first long range flights in the world. During WWII the airport was nearly destroyed by the British. In the 1950s started to be improved and reopened to flights only to Addis Abeba and other cities of Ethiopia. With the independence of Eritrea the airport became the international door of the new Eritrea. In April 2003, after improvements of the runways, Eritrean Airlines started regular services between Asmara and Frankfurt, Milan, Nairobi and Rome.

Details about this review
0 people like this
Africa, Airports
africaAsmaraEritrea