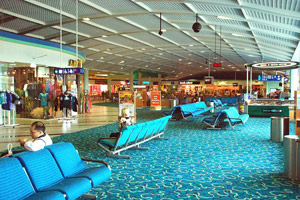 Cairns Airport (IATA: CNS, ICAO: YBCS) is an international airport in Cairns, Queensland, Australia. Formerly operated by the Cairns Port Authority, the airport was sold by the Queensland Government in December 2008 to a private consortium.

Cairns Airport has direct flights to 20 international and 44 domestic destinations and many general aviation flights including a number of helicopter operators. Flights are operated to all major Australian cities and tourist destinations, regional communities in Far North Queensland, and a number of international destinations in the Asia-Pacific region with connections to the rest of the world.

Airport Tours – available on request. Reservations must be made in advance.
ATMs / Cash Machines – ATMs are available in the International Terminal (arrivals area) and Domestic Terminal (departure lounge).
Car Rentals – Avis • Budget • Europcar • Hertz • Redspot • Thrifty. Location: Domestic Terminal, arrivals, north end • International Terminal, arrivals.
Currency Exchange – Travelex has offices in the International Terminal (airside) and Domestic Terminal. Travelex ATMs dispense AUD, NZD, PGK, JPY (Terminal 1) and AUD, USD, PGK (Terminal 2)
Food / Restaurants – At the time of this update it was not known if there are any 24 hour food or beverage concessions at the airport.
Information Desk – info not available
Luggage Storage / Lockers – Luggage storage is available at Wilson Car Park. Rates: from $7.00 (small – 0-3 hours) to $ 15 (large: over 3 hours).
Luggage Trolleys – Free
Showers – Showers are available in the Domestic and International Terminals (landside and airside).
Internet: WiFi is available at Cairns Airport for a fee. Rates: $ 3 per hour • $ 6 per 24 hours • 30 per week. Additionally there are Internet Kiosks located airside.

Airport opening hours:
On Thursday and Sunday nights you can get to stay inside the International until 2am but once the Guam flight departs it’s all shut down. The only exception is International to International transit pax who stay airside inside the departures lounge. Terminal 1 Hours: 3am – last flight

Details about this review
0 people like this
Airports, South Pacific
AustraliaCairnsQueensland