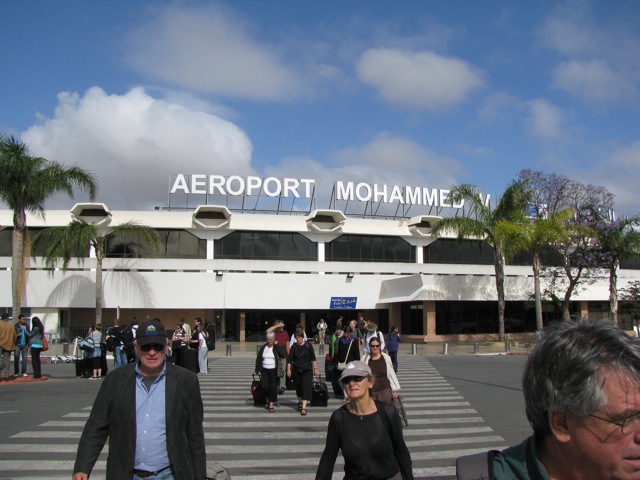 Mohammed V International Airport (French: Aéroport international Mohammed V, Arabic: مطار محمد الخامس الدولي‎, Matar Muhammad al-Khamis ad-Dowaly, IATA: CMN, ICAO: GMMN) is an international airport serving Casablanca, operated by ONDA (National Airports Office). Located in the Nouaceur Province, it is the busiest airport in Morocco, with a traffic of almost 7.25 million passengers passing through the airport in 2010. ONDA informed an increase of 6.9% for passenger traffic in June 2013; this month, the number of passengers handled was 634,690.

The Casablanca Mohammed V Airport was originally built by the United States in early 1943 during World War II as an auxiliary airfield for Casablanca’s Anfa Airport and was named Berrechid Airfield. The airfield handled various military transports as a stopover en route to Port Lyautey Airfield or to Marrakech Airport on the North African Cairo-Dakar transport route. In addition, flights were flown across the Atlantic to the Azores on the Mid-Atlantic route which connected to Nova Scotia or East Coast United States airfields.

Even today, most locals still refer to the airport simply as “Nouasseur”, this comes from the name of the suburb where it is located. Mohammed V is one of the six airports in Morocco where ONDA offers its special VIP service Salon Convives de Marque.

Details about this review
0 people like this
Africa, Airports
Casablancamorocco

Morocco travel guide
Be the first to comment!
Leave a reply »