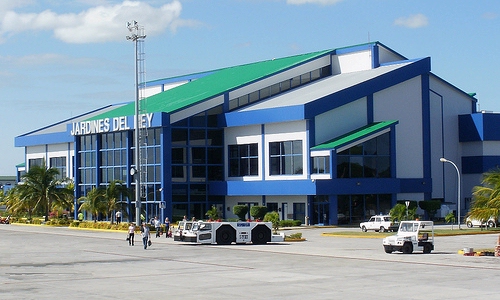 Cayo Coco Airport was an airport in Cayo Coco that served as the main airport of the island until it was superseded by the Jardines del Rey Airport, which opened in 2002.

Cayo Coco Airport also known as Jardines del Rey Airport (IATA: CCC, ICAO: MUCC) is an airport situated on the Island of Cayo Coco, in the Ciego de Ávila Province, Cuba. The airport was inaugurated on December 26, 2002, replacing the earlier Cayo Coco Airport 10 km (6.2 mi) to the west. The airport is the only one in Cuba that has a shared administration with Aena, a Spanish company that manages 47 airports in Spain, twelve in Mexico and three in Colombia. Thousands of Canadian and European holiday makers pass through the airport every year. The airport serves holiday makers bound to both Cayo Guillermo and Cayo Coco. The former runway was incorporated as the new route of highway heading west connecting Cayo Coco with Cayo Guillermo, although some runway markings and taxiways remain visible. The airport terminal buildings and surrounding area have been reclaimed as a small natural park called Parque Natural El Baga.

Access to the Cayo Coco Airport or Jardines del Rey Airport is gained along a highway that links the tourist destination with the rest of the country. The island is united to the mainland by a 17 km (11 mi) causeway that starts from Turiguanó (to 40 km (25 mi) from the airport).