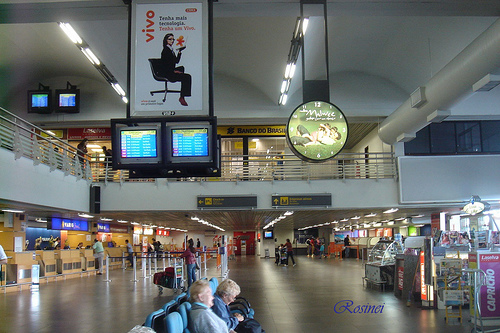 The Florianopolis Airport is served by Hercílio Luz International Airport for both domestic and international flights. The traffic has grown significantly at the airport and therefore the city will shortly receive a new airport able to serve 2.7 million passengers a year. The architectural design of the new airport was chosen by a public competition held by Infraero in partnership with the Brazilian Architects Institute (IAB). Among the over 150 original entries, the proposal of São Paulo architect Mário Bizelli was chosen. Normally the projects for expansion and modernization of the 66 airports administered by Infraeor are done by public tender based on the needs, criteria and conditions presented by the company’s engineering area. On days when one of the two the local football (soccer) teams plays at home in a stadium near the airport, traffic comes to a complete standstill, often preventing vehicles from departing the airport itself. People with departing flights are well advised to check the local football schedule to ensure they arrive at the airport on time.

Some of Florianopolis Airport facilities are shared with the Florianópolis Air Force Base of the Brazilian Air Force. The Some of its is located 14 km (9 mi) from downtown Florianópolis.

Details about this review
0 people like this
Airports, South America
BrazilFlorianópolis