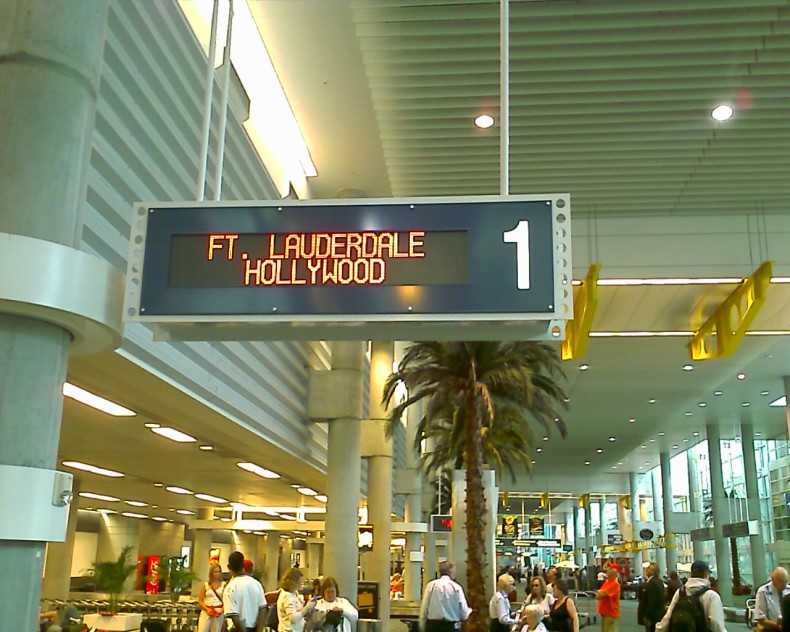 The Fort Lauderdale Airport is ranked as the 21st busiest airport (in terms of passenger traffic) in the United States, as well as the nation’s 14th busiest international air gateway and one of the world’s 50 busiest airports. FLL is classified by the US Federal Aviation Administration as a “Major Hub” facility serving commercial air traffic.

ATMs / Cash Machines – Yes. There is a 24-hour ATM located on the 2nd Level of the Car Rental Center.
Baggage Carts – Locations: Upper and Lower Levels and the Parking Garage. Rate: $3
Car Rentals – Ace • Alamo • Avis • Budget • Dollar • Enterprise • E-Z • Hertz • National • Payless • Royal • Thrifty. Location: Rental Car Center, beside Terminal 1 (access by terminal bridge from concourse B). From Terminals 2, 3 and 4 use the courtesy shuttles.
Currency Exchange – info not available
Food / Restaurants – At the time of this update there were no 24-hour food and beverage concessions. In the past the Dunkin Donuts was open 24 hours.
Information Desk – info not available
Luggage Storage / Lockers – There is a Left Luggage office in Terminals 1, 2, 3, and 4. Hours: 9am – 5:30pm.
Showers – not available
Internet: Free WiFi is available at Fort Lauderdale Airport. Internet Kiosks are available in Terminals 1, 2 and 3

Details about this review
0 people like this
Airports, North America
Broward CountyFloridaUnited States

Miami Airport Reviews
Be the first to comment!
Leave a reply »