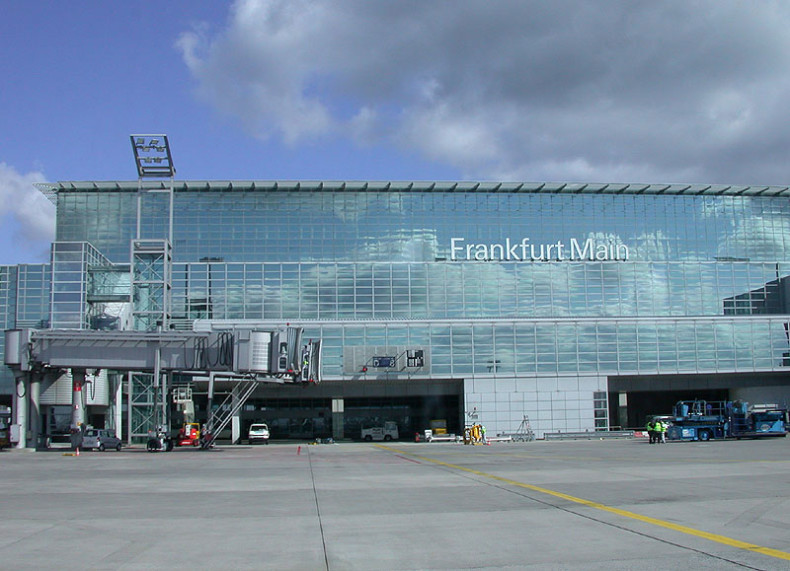 Run by transport company Fraport, Frankfurt Airport is by far the busiest airport by passenger traffic in Germany, the third busiest in Europe (after London Heathrow Airport and Paris-Charles de Gaulle Airport) and the 11th busiest worldwide in 2012. Passenger traffic at Frankfurt Airport in 2012 was 57.5 million. As of winter 2012/2013, Frankfurt Airport serves the most international destinations in the world, serving 264 destinations in 113 countries. With a freight throughput of 2.07 million metric tonnes in 2012 it is the second busiest airport in Europe by cargo traffic. The southern side of the airport ground was home to the Rhein-Main Air Base, which was a major air base for the United States from 1947 until 2005, when the air base was closed and the property was acquired by Fraport. The airport covers an area of 5,200 acres (2,100 ha) of land.

Frankfurt Airport is the main hub of Lufthansa, Germany’s flag carrier, and of Condor. Due to capacity constraints in Frankfurt, Lufthansa has established a secondary hub at Munich Airport, where many key medium and long-haul routes are available.

The airport has been expanded several times since its opening in 1936 and has now two large terminals (Terminal 1 and Terminal 2), with a capacity of approximately 65 million passengers yearly, and four runways. In recent years, major construction works were necessary to make the airport compatible for the Airbus A380, including a large A380 maintenance facility, because Lufthansa has stationed its A380 aircraft fleet at Frankfurt Airport. On October 20, 2011, the fourth runway went into operation, which will allow the airport to meet the predicted demand of about 700,000 aircraft movements in 2020. To handle the predicted passenger amount of about 90 million in 2020, a new terminal section adjacent to Terminal 1 for an additional six million passengers opened on October 10, 2012, and a large third terminal for 25 million passengers is scheduled to be built in the near future.

Airport Experience Tours – Frankfurt airport offers a 45-minute “airport experience tour” which uniquely acquaints you with life at Frankfurt airport. Alternatively, you may go behind-the-scenes to look at the airport’s famous fire brigade. Tours begin at 1pm, 2 pm, 3pm and 4 pm. (weekdays) and 11 am and 12 noon (weekends and holidays). Starting point: the pedestrian bridge between Terminal 1 and the Frankfurt Airport Center. Rate: € 8.00. No advance booking is required. Tickets can be purchased at the tour counter in the Airport City Mall Frankfurt in Terminal 1, Level 0. There are a number of other tours available: Maxi Tour (90 minutes), Fire Department Tour (105 minutes), and the Sunset Tour (120 minutes). These tours require reservations. Rates: 15,00 € – 25,00 € depending on the tour.
ATMs / Cash Machines – Cash machines are located throughout the terminal (landside and airside).
Car Rentals – Avis • Budget • Europcar • Hertz • National • Sixt and more. Location: Terminal 1, Concourse A, Level 0, Airport City Mall Frankfurt and Terminal 2, Concourse D, Level 2.
Children’s Play Areas – If you are traveling with children, here are a few areas (airside) to take them for some entertainment:
Terminal 1, Concourse A, Level 2 (Departures) between gates A26 and A28 (behind the passport check) • Terminal 1, Concourse B between gates B22 and B24 • Terminal 2, Concourse E, Level 2, next to entrance E9 • Terminal 2, between Concourses D and E, Level 4 (Food Plaza, McDonald’s).
Food / Restaurants – There are many food and beverage concessions at Frankfurt Airport. Below are the 24-hour food options:
»Landside – Terminal 1: Connection • Starbucks
»Airside – Terminal 1: HUB/Convenience store • Quicker’s
»Landside – Terminal 2: McDonald’s
»Airside – Terminal 2: Quicker’s
Casino – Play Roulette, Black Jack or the slot machines. Location: Terminal 1, Landside, Section C, Level 2. Hours: 7:00am – 1:00pm.
Conference Centre – For you business travelers, the airport has office and meeting space available for rent, as well as interpreter service. Location: Terminal 1, Area FAC, Level 3. Hours: 7am – 9:30pm (Mon – Fri) • 9am – 6pm (Sat & Sun).
Cots – In the event of bad weather or delays, this airport has a supply of cots for stranded travelers. At the moment, we are not sure where you can find them or how you can get your hands on one, but they do exist. Coupon Wall – If you are looking for deals and discounts on food and shopping at the airport, visit the Coupon Wall located in the Terminal 2 Shopping Plaza, Level 3. Hours: 10am – 7pm.
Currency Exchange – available before and after security.
Entertainment and Games – more slot machines, BigCash Club, Internet Terminals, computer games and more. Location: Terminal 1, Landside, Section B, Level 0. Hours: open 24 hours.
Lunchtime Concerts – the airport has a lunchtime concert program on scheduled dates. Concerts are held in the Chapel, Terminal 1, Departures Hall B.
Hairdresser – Location: Terminal 1, Concourse C, Level 0, Airport City Mall Frankfurt. Hours: 8am – 8pm.
Information Desk – In the transit zone, there are information desks in these locations: Terminal 1B, Level 2 (“Information 12”) • Terminal 1B, Level 3 (“Information 10”). There are also pre-security information desks in Terminal 1 B on the departures and arrivals levels and in Terminal 2 on the departures level. You can also use one of the many service telephones (dial 118) or ask the mobile service guides.
Laundry – Dry Cleaning is available in Terminal 1, Concourse C, Level 0, Airport City Mall Frankfurt. Hours: 7am – 8pm (Mon-Fri) and 9am – 5pm (Sat-Sun).
Luggage Storage / Lockers – Unload your heavy bags while you enjoy the airport. There are a few left luggage offices:
Terminal 1 (Concourse B, Level 1) – Hours: 24 hours
Terminal 1 (Concourse B/C, Level 2) – Hours: 6am – 10pm
Terminal 2 (Concourse D, Level 2) – Hours: 6am – 10pm
Rates: € 7 (2 – 24 hours)
Medical – If you require medical assistance, the following service may be of use to you:
»Airport Clinic – First Aid and medical care are available in Terminal 1, access via Concourse B/C, Level 1. Hours: open 24 hours.
»Optician – Locations: Terminal 1, Concourse B, Level 2, Shopping Avenue • Terminal 1, Concourse A, Level 2 •Terminal 2, Concourses D and E, Shopping Plaza. Hours: 6am or 7am – 10pm
»Pharmacy – Terminal 1, Concourse B, Level 2 • Terminal 2, Concourse D/E, Level 3 (near the SkyLine). Hours: 7am – 10pm
Mobile Charging – There are many Oracle charging stations throughout the airport that you can use free of charge. You can also charge your cell phone free in the Around the World restaurant (Terminal 1 A, Level 2).
Prayer Rooms – Locations: Terminal 1, Concourse B, Level 2 (Landside) and Terminal 2, Concourse D, Level 3. Hours: open 24 hours.
Relax Zones – Lounge style seats area available for transit passengers in the Relax Zones located in Transit Hall B East (near Gate B43).
Showers – Towels, floor mat, shower gel and hair dryer are available in three areas of the airport. Rate: €6 /US$ 8. The airport’s shower facilities are located in the following areas:
– Terminal 1, Landside, B Departures, Shopping Boulevard across from “TUMI” and the pharmacy. Hours: 6am – 10pm
– Terminal 1, Airside, Transit B, Level 3 opposite the “Lufthansa Senator Lounge”, to the left of Kuffler and Bucher. Hours: 6am – 10pm.
– Terminal 2, Airside, Concourse D, Level 3, opposite security controls D 5-8. Hours: 6am – 11pm.
Smoking Areas – Smoking is not permitted inside the terminal except in the enclosed smoking booths located in the transit areas of Terminal 1 (A, B, C/D) and Terminal 2.
Spa – Be Relax offers massages and an oxygen bar. Location: Terminal 1, Area A, Level 2 • Terminal 1, Area Z, Level 3 • Terminal 2, Area D, Level 3 • Terminal 2, Area E, Level 3.
Travelling with kids – The following areas have kids play areas.
Terminal 1, A Concourse, Level 2 (Departures) between gates A26 and A28 (after the passport check).
Terminal 2, E Concourse, Level 2, to one side of entrance E9.
Terminal 2, between the D and E Concourses, Level 3 (Food Plaza, McDonald’s).
Visitor Terrace – Watch the action in the apron area from the of the Visitors’ Terrace. Location: Terminal 2. Hours: 10am – 6pm. Rate: €5.
Internet – Free WiFi is available at the Frankfurt Airport for 30 minutes.
Additionally, you can can also surf the Internet at one of the Free Internet Points (sit-down terminals) or 100 Internet Towers (stand-up terminals).