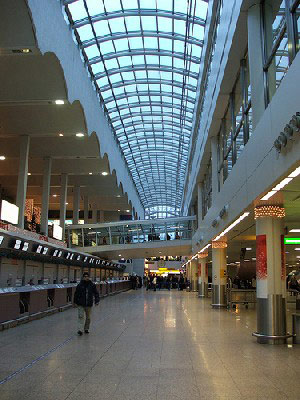 In 2012 the airport handled over 7.1 million passengers, a 4.0% annual increase, making it the second busiest in Scotland, after Edinburgh Airport, and the eighth busiest airport in the United Kingdom. It is the primary airport serving the Greater Glasgow conurbation and is also the principal transatlantic and direct longhaul entry airport into Scotland.

The Glasgow Airport is owned and operated by Heathrow Airport Holdings (formerly BAA), which also owns and operates three other UK airports, and is itself owned by FGP TopCo Limited, an international consortium, which includes Caisse de dépôt et placement du Québec and GIC Special Investments, that is led by the Spanish Ferrovial Group. The airport’s largest tenants are British Airways and Loganair (currently franchising using Flybe), the latter using it as a hub. Other major airlines using GLA as a base include Flybe, EasyJet, Jet2, Thomas Cook Airlines and Thomson Airways.

Glasgow Airport was first opened in 1966 and originally only facilitated flights to other places in the United Kingdom and Europe. The British Airports Authority (BAA) took control of the airport in 1975 and when BAA was privatised in the 1980s, Glasgow Airport began to offer flights to other places around the world, flights which previously were facilitated by Glasgow Prestwick Airport, which was subsequently relegated as the city’s secondary airport catering for low cost airlines and charter operators.

Details about this review
0 people like this
Airports, Europe
GlasgowScotland

Glasgow Prestwick Reviews
Be the first to comment!
Leave a reply »