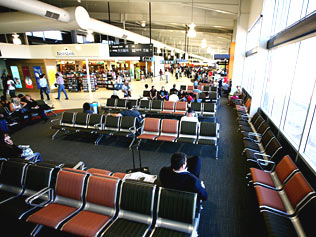 Gold Coast Airport, or Coolangatta Airport, (IATA: OOL, ICAO: YBCG) is an Australian domestic and international airport at the southern end of the Gold Coast, some 100 km (62 mi) south of Brisbane and 25 km (16 mi) south of Surfers Paradise.

The entrance to the Gold Coast Airport is situated in the suburb of Bilinga on the Gold Coast. The runway itself straddles five suburbs of twin cities across the state border of Queensland and New South Wales. During summer these states are in two different time zones.

For the 2010–11 financial year, Gold Coast Airport was the sixth busiest airport in Australia in terms of passengers and eighth in aircraft movements. It is also the third fastest growing airport in the country.

ATMs / Cash Machines – Yes
Car Rentals – Avis • Budget • Europcar • Hertz • Redspot • Thrifty.
Currency Exchange – There is a Travelex office in the International Departures Terminal. ATMs located throughout the airport dispense AUD, NZD and Yen.
Food / Restaurants – At the time of this update there are no 24-hour food concessions at the airport.
Information Desk – info not available
Luggage Storage / Lockers – Lockers are located between the main terminal and the short term car park. Maximum storage limit is 24 hours. Hours: 5am – 11pm. Rates: $4 (4 hours) – $8 (24 hours) for a small locker • $6 (4 hours) – $10 (24 hours) for a medium locker• $8 (4 hours) – $12 (24 hours) for a large locker.
Showers – No
Smoking – info not available
Internet: Free WiFi is available at the Gold Coast Airport. Internet kiosks are also available for a fee.

Details about this review
0 people like this
Airports, South Pacific
AustraliaGold CoastQueensland