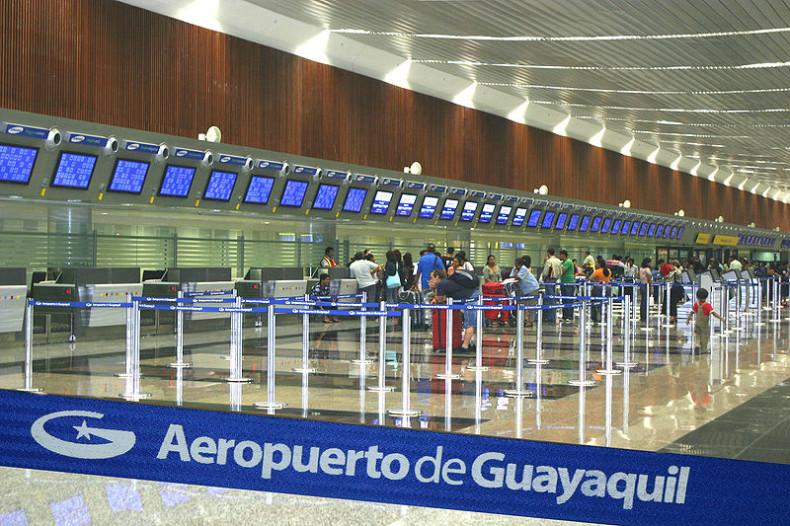 José Joaquín de Olmedo International Airport (Spanish: Aeropuerto Internacional José Joaquín de Olmedo) (IATA: GYE, ICAO: SEGU) is an airport serving Guayaquil, a city in the province of Guayas in Ecuador. The airport was named after José Joaquín de Olmedo, a notable Ecuadorian poet, first mayor of the city of Guayaquil and former president of Ecuador. Its was changed from Simón Bolívar International Airport, which is currently the name on the airports in Caracas, Venezuela, and Santa Marta, Colombia. The airport is located 5 km (3.1 mi) north of Guayaquil’s centre, on the Avenida de las Américas, and has a runway with a length of 2,790 m (9,150 ft), an elevation of 5 m (16 ft), and can accommodate Boeing 747s, MD-11s and Airbus A340-600 aircraft. As of 9 February 2011, an airport exit tax was levied on all international tickets. However, it is no longer required to pay at the window when exiting the country, but the policy may change at a later time. It is the second busiest airport in Ecuador.

The Guayaquil Airport is planned to serve the city of Guayaquil for 10 to 15 years starting in 2006. After this, it is expected to reach a capacity of 5 million passengers a year, and when this happens a new airport will be built in the Daular area, some 20 kilometers outside the city, near the highway that connects Guayaquil to Salinas and other coastal towns.

José Joaquín de Olmedo International Airport was named “Best Airport in Latin America 2008 & 2009” by BusinessWeek and the second best in 2011. All domestics flights going from the Ecuadorean mainland into the Galapagos Islands make a stop in Guayaquil to refuel and pick up passengers due to its location, which is the closest point from Ecuador to the Galapagos Islands.

Details about this review
0 people like this
Airports, South America
GuayaquilSouth America

Caracas Airport Reviews
Be the first to comment!
Leave a reply »