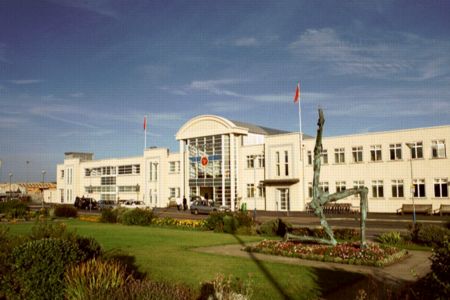 Isle of Man Airport (IATA: IOM, ICAO: EGNS), also known as Ronaldsway Airport and, in Manx, Purt Aer Vannin, is the main civilian airport on the Isle of Man. It is located in the south of the island at Ronaldsway near Castletown, 6 NM (11 km; 6.9 mi) southwest of Douglas, the island’s capital.

Along with the Isle of Man Sea Terminal, it is one of the two main gateways to the island. The Isle of Man Airport has scheduled services to the United Kingdom, Ireland, Guernsey and Jersey. A project by Ellis Brown Architects began in November 1998 to extend the airport and improve the facilities available to passengers. In March 2000 the new extension was opened, providing a new landside catering outlet, arrivals area, baggage hall and departure lounge. The existing part of the airport was refurbished during this time to provide improved check-in facilities and offices, linked to the extension with a new airport entrance. During the extension and renovation period the iconic Three Legs of Man sculpture adorning the airport’s façade was also refurbished.

The Isle of Man Railway also stops at the nearby Ronaldsway request stop, making possible a unique opportunity in the British Isles to travel to an airport behind a steam locomotive.

ATMs / Cash Machines – There is an ATM in the main entrance lobby.
Car Rentals – Athol Car Hire, bus services are provided by Bus Vannin, formerly Isle of Man Transport. Bus Vannin routes 1, 2, 11 and 12 serve Douglas, Castletown, Colby, Port Erin and Port St Mary. Buses are every 20 minutes Monday – Saturday during the day and every 30 minutes during evenings and Sunday. Routes 8 and 8A also connect the Airport with Peel – St John’s – Foxdale and Castletown. (according from wikipedia)
Currency Exchange – not available
Food / Restaurants – At the time of this update there are no 24 hour food concessions.
Information Desk – Location: Main Hall
Luggage Storage / Lockers – Location: Rendezvous Airport Services, in the check-in hall
Observation Deck – Location: Landside, First Floor.
Showers – Not available
Internet: Free WiFi is available at Isle of Man Airport in the Departures Lounge and Buffet Areas.

Details about this review
0 people like this
Airports, Europe
EuropeIrelandIsle of ManMalewMannRonaldsway

Amsterdam Schiphol Airport Reviews
Be the first to comment!
Leave a reply »