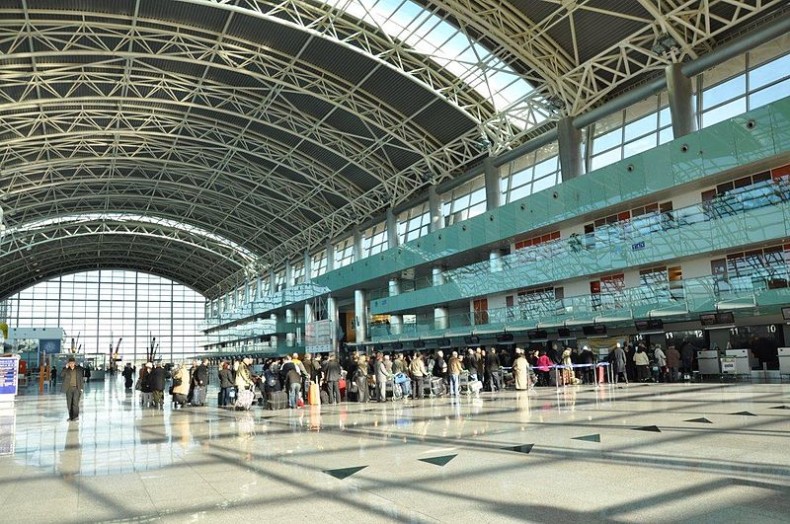 İzmir Adnan Menderes International Airport (IATA: ADB, ICAO: LTBJ) is an airport serving İzmir and is named after former Turkish prime minister Adnan Menderes. It is located in the Gaziemir area of İzmir.

İzmir’s main airport is located 18 km (11 mi) southwest of the city on the way to Selçuk, Ephesus and Pamukkale.

The easiest way to get there from İzmir is by İZBAN commuter rail service or the Havaş airport shuttle bus (every 20 minutes, 35 to 60 minutes) from the Turkish Airlines office.
Trains operated by the Turkish State Railways stop at the Airport Station. There are currently about 14 daily trains in both directions. Northbound trains all go to Basmane Terminal in the city center, while southbound trains serve Ödemiş, Tire, Söke, Aydın, Nazilli and points in between. Selçuk and Ephesus are 60 km (37 mi) south of ADB, reachable by rental car (less than an hour’s drive), or cheap, slow train (six times daily). Pamukkale is 252 km (157 mi) from ADB, a drive of about 4 hours (4½ to 5 hours by bus).

The new Izmir Airport international terminal was opened in September 2006

Details about this review
0 people like this
Airports, Europe
GaziemirIzmirTurkey

Antalya Airport Reviews
Be the first to comment!
Leave a reply »