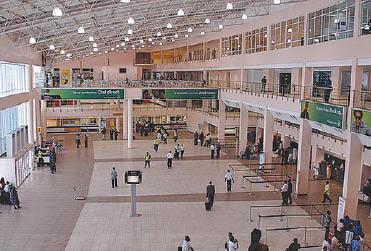 Mallam Aminu Kano International Airport (IATA: KAN, ICAO: DNKN) is located in Kano, the capital city of Kano State of Nigeria. It was a Royal Air Force station before the country became independent. It is the main airport serving northern Nigeria and was named after politician Aminu Kano.

The Kano airport consists of an international and a domestic terminal. The terminals share the same runway. Construction started on a new domestic terminal and was commissioned on May 23, 2011. In 2009, the airport handled 323,482 passengers. Mallam Aminu Kano International Airport is the oldest in Nigeria, with operations starting in 1936. In the first decades of operation, it became an important fuel stop for airlines flying long-haul services between Europe and Africa. Newer aircraft did not need such fuel stops any longer and, with the demise of the economy of Kano in the late 20th century, many international airlines stopped serving the airport. Until May 2012, KLM was the only European airline serving Kano, which they had done without interruption since 1947. This makes KLM the longest-serving foreign airline in Nigeria.

Kano airport’s bulk of international flights cater for the large Lebanese community in Kano and Muslim pilgrimages to Mecca. Construction of a new domestic terminal, adjacent to the main terminal building, started in the beginning of the 21st century. Construction was abandoned but was resumed. The operator of the airport, Federal Airports Authority Nigeria (FAAN), saw the completion of the new terminal in November 2009. It was commissioned on May 2011.

Details about this review
0 people like this
Africa, Airports
Kanonigeria

Arik Air Reviews
Be the first to comment!
Leave a reply »