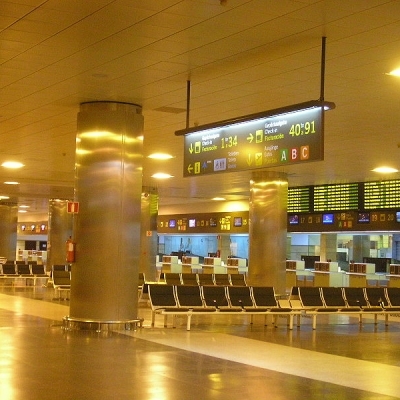 Las Palmas Airportalso known as Gran Canaria Airport (IATA: LPA, ICAO: GCLP), (sometimes also known as Gando Airport), (Spanish: Aeropuerto de Gran Canaria is a passenger and freight airport on the island of Gran Canaria. It is an important airport within the Spanish air-transport network (owned and managed by a public enterprise, AENA), as it holds the fifth position in terms both of passengers and cargo transported, and fourth in terms of operations. It is also ranks first of the Canary Islands in all three categories.

In 2011, Las Palmas Airport handled over 10.5 million passengers, a 11.1% increase compared to 2010, and 23,7 million tonnes of cargo (-3,5%). Gran Canaria Airport remains as a relevant connecting airport for passengers travelling to West Africa (Morocco, Western Sahara, Mauritania, Senegal, Cape Verde, among others) and to the Atlantic Isles of Madeira and Açores. It is the operative base for Binter Canarias, NAYSA, Islas Airways, Ryanair and Norwegian Air Shuttle. Other airlines operate a base for connecting charter flights to Cape Verde and Gambia (TUIfly and TUIfly Nordic), only in winter season.

The Las Palmas Airport is located in the eastern part of Gran Canaria on the Bay of Gando (Bahía de Gando), 19 km (12 mi) south of center of the city of Las Palmas de Gran Canaria, and 25 km (16 mi) from the popular tourist areas in the south.

Las Palmas Airport was an official alternative (emergency) landing site for the NASA Space Shuttle, before the ending of Space Shuttle programme in July 2011.

Details about this review
0 people like this
Airports, Europe
Grand Canaria Las PalmasIngenioSpainTelde