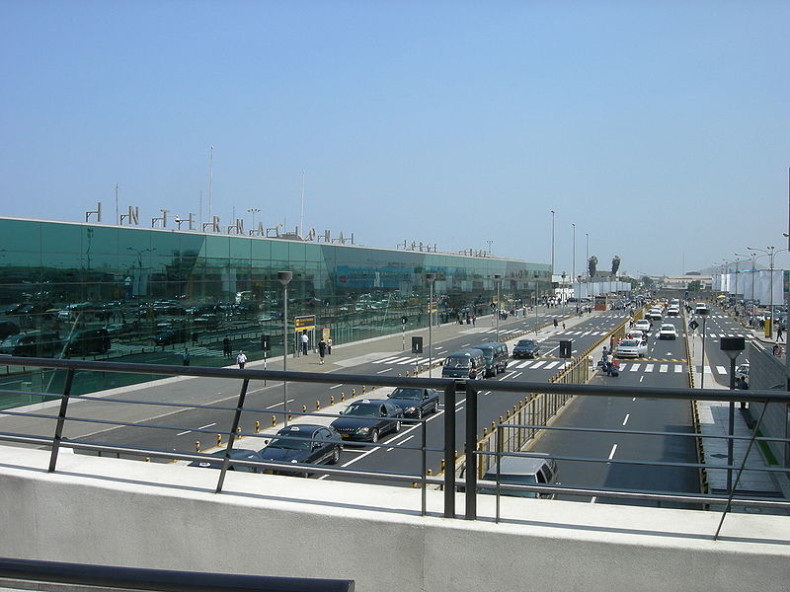 Jorge Chávez International Airport (IATA: LIM, ICAO: SPIM), known as Aeropuerto Internacional Jorge Chávez in Spanish, is Peru’s main international and domestic airport. It is located in Callao, 11 kilometers (7 mi) from the Historic Centre of Lima and 17 km (11 mi) from Miraflores. Callao is the port city now fully integrated with Lima, the nation’s capital. In 2008, the airport handled 8,288,506 passengers and 98,733 aircraft movements.

The airport was named after Peruvian aviator Jorge Chávez.

Jorge Chávez International Airport is home to Lima Cargo City, a hub for cargo airlines. The 35 million dollar project was completed and began operations on 12 May 2009. This cargo terminal is among the largerst cargo centers in Latin America.

ATMs / Cash Machines – Locations: Peru Plaza, the Main Hall, Domestic Terminal and International Terminal
Car Rentals – Not available
Chapel – Location: 2nd level on their International Arrivals side of the terminal.
Currency Exchange – There were 3 or 4 foreign exchange kiosks available: two near Domestic Arrivals and another 1 (possibly 2) kiosks located before the security entrance. If you haven’t spent your remaining soles by the time you pass through security you will have to unload them in the duty free section or be stuck with them.
Food / Restaurants – The food court is located landside on the 2nd level. They say that food is available 24 hours.
»Landside: Dunkin’ Donuts • Manos Morenas • Mediterraneo Chicken • McDonalds • Papa Johns • Manacaru •
»Airside: Smoking Bar • to Go Smoking Bar • Starbucks
Information Desk – There is an Information Deck on the main floor near the International Arrivals with English speaking agents. Go to them if you have any questions. Hours: unknown
Luggage Storage / Lockers – Location: Domestic Arrivals Area. Hours: 24 hours
Showers – Showers are available in the lounges and the Ramada Costa del Sol.
Internet – Free WiFi is available at Starbucks with purchase. WiFi is available at the Lima Airport. You can purchase WiFi cards at Peru Plaza, in the domestic and international terminals, and at Telefonica on the second level. Computer workstations with internet connections are available at Telefonica.

Details about this review
0 people like this
Airports, South America
Jorge ChavezLimaSouth America

Caracas Airport Reviews
Be the first to comment!
Leave a reply »