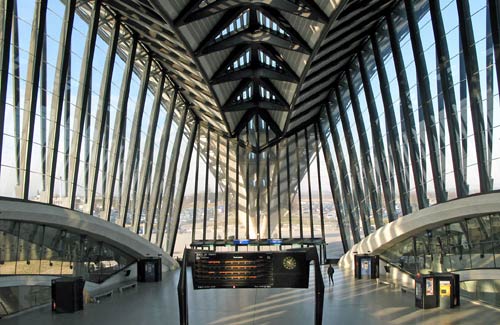 The Lyon Airport was inaugurated by President Valéry Giscard d’Estaing on 12 April 1975 and opened to passengers a week later. It was designed to replace the old Lyon–Bron Airport which could not be extended as it was located in an urban area.

The Lyon Airport consists of three terminals and two runways aligned north–south. The airport has 18 jetways in all three terminals. Terminal 3 is used by low-cost airlines and has very basic facilities.

ATMs / Cash Machines – Located at departure and arrival gates 15 , 21 , 27 and le Centre (post office).
Baggage Trolleys – A deposit of  €1 coins is required. if you do not have any coins, you can free tokens in the arrival halls and car parks.
Car Rentals – Avis • Europcar • Hertz • National • Sixt
Chapel – There is a spiritual and interfaith centre located in Le Square.
Currency Exchange – Global Cash. Location: Le Centre. Hours: 6:30am – 9:30pm (Mon – Sat) and 9:00am – 7:00pm (Sun & Holidays).
Food / Restaurants – At the time of this update there were no 24 hour food concessions.
Games Area – Locations: Terminal 1, départ 15 and Terminal 2, départ 21
Luggage Storage / Lockers – Location: Service & Information Centre in the Square. Hours: 6am – 11pm. Rate: 10 €
Mobile Charging – There are 5 tables in the restaurant area of Terminal 1 that enable mobile charging.
Pharmacy – Location: Le Square, Airside. Hours: 8am – 8pm (Mon – Fri) • 8am – 7pm (Sat) • 10am – 8pm (Sun).
Showers – Available. Rates: 12 € for the “confort” shower and 7 € for the “loisir”
Internet: WiFi is available in the Lyon Airport in the lounges. A reader tells us that Free WiFi is also available in center Food Court (between Terminal 1 and Terminal 2).

Details about this review
0 people like this
Airports, Europe
FranceLyon