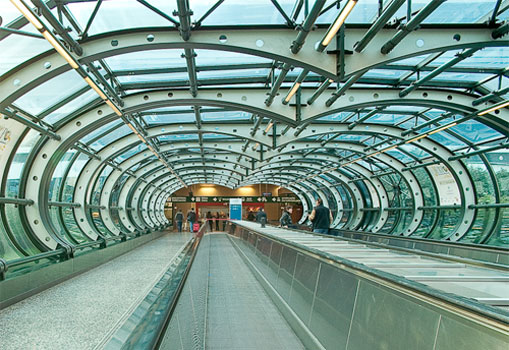 Milan Malpensa Airport (IATA: MXP, ICAO: LIMC), also named City of Milan Airport, former City of Busto Arsizio Airport is the largest airport of Milan, northern Italy. The first industrial airport was opened in 1909 near the Cascina Malpensa, an old farm, by Giovanni Agusta and Gianni Caproni to test their prototypes. The civil flight airport was then opened in 1948, during war reconstruction, to serve the northern area of Milan. Until recently it was a major hub for Alitalia, but now serves as a hub for long-haul flights and low-cost carriers. It is located 40 kilometres (25 mi) northwest of central Milan, Italy. It is one of 3 airports in the Milan metropolitan area.

The Milan Malpensa Airport is in the Province of Varese, within the communes of Cardano al Campo, Somma Lombardo, Casorate Sempione, Ferno, Lonate Pozzolo, Samarate, and Vizzola Ticino.

EasyJet has a dedicated Terminal (T2) and Milan Malpensa Airport is the company’s biggest base outside the United Kingdom.

Milan Malpensa Airport has two terminals and a third runway has been announced, with construction to commence in 2014 and finish in 2017. There is also a dedicated cargo terminal called “CargoCity”, which currently handles over 410,000 tons of yearly traffic.

ATMs / Cash Machines: Cash machines are available Landside and Airside (non-Schengen Gates A) in Terminal 1. In Terminal 2, there is a cash machine landside in the departures area.
Car Rentals: Terminal 1: Avis •Europcar • Hertz • Sixt • Thrifty • and others. Terminal 2: Avis • Europcar
Chapel: Locations: Terminal 1, Landside, Check-in Area, 2nd Floor and Terminal 2, Landside, Departures.
Children’s Play Area – Interactive games for the kids can be found at Terminal 1, Boarding Area B (in front of the pharmacy) • Terminal 1, Satellite
Currency Exchange: There are six foreign currency counters in the Malpensa 1. Locations: airside (non-Schengen Boarding Gates B) and landside (Check-in Hall and Arrivals Area). Hours: vary. At Malpensa 2, there are two exchange counters. Locations: airside (Schengen – D Gates). Hours: 7am – 8pm
Food / Restaurants – At the time of this update, there were no 24-hour food and beverage concessions. Vending Machines are located Landside and Airside.
Luggage Storage / Lockers: Location: Terminal 1, Arrivals B, Ground Floor. Rates: from € 3,50 to € 4,00 per item per day. Hours: 6am-10pm
Pharmacy – Location: Terminal 1, Boarding Area B • Terminal 1, Ground Floor • Terminal 1, Departures Floor • Terminal 2, Ground Level. Hours: 8am – 8pm.
Showers: Not available.
Travelling with children? There is a special “Family Lane” when passing through security. If you are travelling with children under the age of 13 take the stairs nearest to check-in areas 7 and 8 to reach the dedicated family lane.
Internet: WiFi is available at Milan Malpensa Airport for a fee.

Details about this review
0 people like this
Airports, Europe
ItalyMilanMilan Malpensa AirportSomma Lombardo