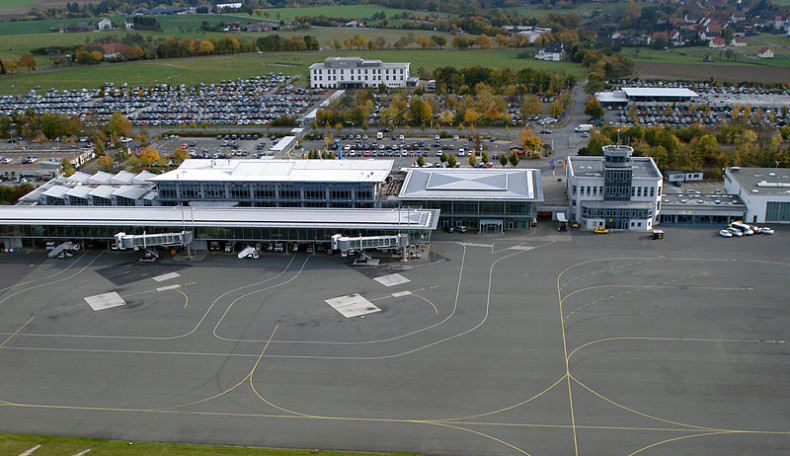 Paderborn Airport also known as Paderborn/Lippstadt Airport (German: Flughafen Paderborn/Lippstadt) (IATA: PAD, ICAO: EDLP) is an airport in Germany that serves the Ostwestfalen-Lippe area in North Rhine-Westphalia. While the name implies a location within the city of Paderborn or the town of Lippstadt, the airport is actually located near the town of Büren, around 18 km (11 mi) from Paderborn city center.

Paderborn Airport terminal offers several facilities for travelers. There are mainly travel agencies in the airport, but it also contains a restaurant, shops and car rental agencies as well as a visitors deck. The apron features five stands for mid-sized aircraft such as the Airbus A320 of which three are equipped with jet bridges. There are also several stands for smaller general aviation aircraft.

The Paderborn Airport is located next to the Autobahn A 44 at the exit Büren (60). Long term parking at the airport is for free. There is a bus shuttle from the main station in Paderborn. It operates more or less on an hourly basis. There are thoughts about building a train connection to the airport in the future.

Paderborn Airport came into being in 1971 as the Flughafen Paderborn/Lippstadt GmbH, with 1.03 million passing through the airport in 2010.

Airport Tours – At the time of this update, tours of the airport were available for groups of at least 15 people. Duration: 75 minutes. Rate: 6 euros (adults) and 3 euros (child).
ATMs / Cash Machines – A cash machine is located across from the Information Desk (landside).
Car Rentals – info not available
Food / Restaurants – At the time of this update there were no 24-hour food and beverage concessions. Food options include:
»Landside: Bistro Airport
»Airside: Bistro Lounge • quax fast. fine. food.
Information Desk – Location: unknown Hours: open 24 hours
Late Night Check-in – The Late Night Check-in counters open every day between 6pm – 8pm. The following airlines offer Late Night Check-in: Air Via, Air Berlin, Sun Express, Tuifly, Sky Airlines, Pegasus, Tunis Air, Air Europa, Bulgarien Aircharter and Germania. Check directly with your airline as this list may change.
Luggage Storage / Lockers – Not available
Observation Deck – For a panoramic view of the airfield, head up to the top floor of the Quax-Hangar. The building has been designed to resemble the wing of an airplane. There is also a bistro called “Triebwerk”. Location: follow signs towards the “Airport Forum”. Hours: 9am – 10pm (Sun – Thurs) and 9am – 12am (Fri & Sat)
Showers – Not available
Internet: info not available

Details about this review
0 people like this
Airports, Europe
BürenGermanyLippstadtPaderborn

Muenster Osnabrück Airport Reviews
Be the first to comment!
Leave a reply »