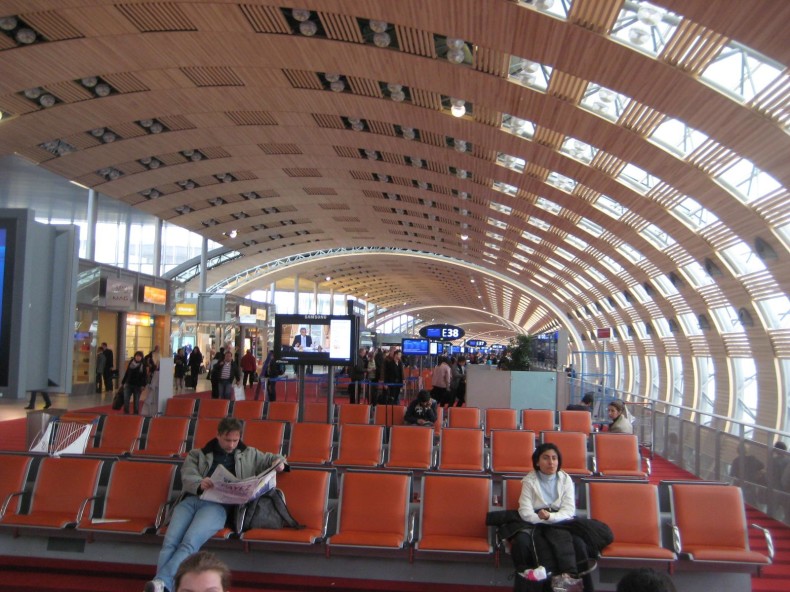 Paris Charles de Gaulle Airport is also is the world’s tenth busiest and Europe’s busiest airport in aircraft movement. In cargo traffic, the airport is the fifth busiest in the world and the second busiest in Europe after Frankfurt Airport, having handled 2,087,952 metric tonnes of cargo in 2011.

Car Rentals – Avis • Europcar • Hertz • National • Sixt • and others. Location: Terminals 1, 2A, 2B, 2C, 2D, 2F
Chapels / Prayer Rooms – Location: Terminal 1, Shopping Area, Level 2, near Post office • Terminals 2ABCD, Shopping area, near the post office and pharmacy • and Terminal 2F, Arrivals entrance
Children’s Play Areas – There are special play areas for children to keep entertained while waiting for the flight departure. There are 3 Guili themed play areas: Terminal 2C, boarding lounge, airside • Terminal 2F, boarding lounge, airside • Terminal 2D, boarding lounge, airside. A Disney themed area is located in the Terminal 2E boarding area.
Cots – According to a review that came in on June 01, 2012, the airport provided stranded travellers cots in Terminal 2E (airside).
Currency Exchange – Travelex has 23 offices located throughout the various terminals (landside and airside). Hours: varies, but generally most locations are open from 6am.
Food / Restaurants – There are no 24 hour food concessions available in the terminals. There are vending machines.
Games – Playstation terminals can be found airside in all terminals.
Light Therapy – In 2012, the airport will be offering a free Light Therapy area. Location: unknown
Luggage Storage / Lockers – Bagages du Monde offers a luggage storage service (6 hours minimum to several days). Location: Terminal 2, TGV-RER train station level, in front of Sheraton Hotel. Hours: 6am – 9:30pm . Rates: from € 6.00 per bag.
Museum – info not available.
Music Lounge – The Music Lounge has 4 individual listening stations and can also be used with your own player. Location: Terminal B, Airside, Schengen
Pharmacy – Locations: Terminal 1, CDGAL Level, landside (Hours: 8am – 7:20pm Mon-Sat and 9am – 7:20pm Sun) • Terminal 2, AC connection, landside • Terminal 2E, Departures Level, landside
Showers – The Air France Arrivals Lounge is rumoured to have one. Unless you are are Premier flyer, you won’t be seeing it!
Sony HD Viewing Room & Soundcorner – New features that opened 2011. The first Sony HD video viewing room is located airside in Terminal 2E.
Workstations – Equipped with an electric socket to plug in your portable computer, the business workstations are designed for you to make the most of your waiting time. Locations: Terminal 1, airside, in the boarding lounges • Terminal 2D, airside, near gate D55 • Terminal 2EF, landside and airside, in the boarding lounges • Terminal 2G, airside
Internet: Free WiFi is available at Paris CDG for 15 minutes. Beyond that, you can pay a fee to extend your time. You can buy time cards at the Relay Stores or you can do it directly online. I paid EUR 4.50 for a measly 1 hour connection. I believe the day pass was EUR 9.95 (valid only on the day you begin to use it). Don’t buy a day pass an 10PM, because you will only get to use the WiFi for 2 hours….the day pass is only good for the day you start to use it. Atlanteam Cyber Cafe. Rates start at 2 EUR/15 minutes. Located airside in Terminals 1, 2E and 3. Multimedia Terminals. Rates: €0.15 for 1 minutes. Location: airside and landside in all terminals

Saint Pierre and Miquelon Airport Reviews
Be the first to comment!
Leave a reply »