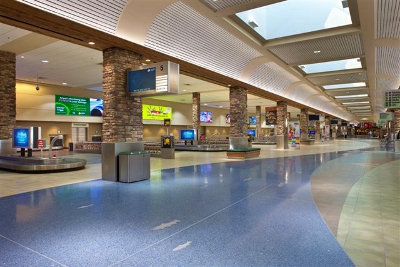 The Reno–Tahoe International was the hub of Reno Air, a now-defunct medium sized airline that had MD-80 and MD-90s to many cities until it was bought by American Airlines and later disposed of in 2001. Reno Air’s first flight was on July 1, 1992 and its last flight was August 30, 1999.

Reno Tahoe Airport passenger terminal is named after the late US Senator Howard Cannon. The main lobby of the terminal contains an exhibit featuring the bust of Nevada State Senator (and Nevada State Senate Minority Leader) William J. “Bill” Raggio. Raggio is described in the exhibit as being “The Father of the Airport Authority.” The Nevada Air National Guard has the 152nd Airlift Wing southwest of the Reno Tahoe Airport’s main terminal.

Public transportation to the Reno Tahoe Airport is available on the airport drive via RTC Ride bus #19, which operates Monday through Friday. The bus takes passengers to the Downtown 4th Street Station. In addition, RTC Ride bus #12 takes people to the Downtown 4th Street Station and Meadowood Mall. The bus stops at Terminal Way & Villanova Street, which is a short walk from the north baggage claim via the marked pedestrian walkway.

Reno–Tahoe International Airport is the 61st busiest commercial airport in the nation and in the fall of 2010 opened a new 200 ft (61 m) ATCT replacing the old one of more than 50 years. The new tower is equipped with the latest in TRACON technology including ground radar. It cost over $30 million. It was designed by the Parsons Design Firm, responsible for the design of many other ATCT towers. And Reno Tahoe Airport is the second busiest commercial airport in Nevada after McCarran International Airport in Las Vegas.

Details about this review
0 people like this
Airports, North America
NevadaRenoUnited States

Las Vegas McCarran Airport Reviews
Be the first to comment!
Leave a reply »