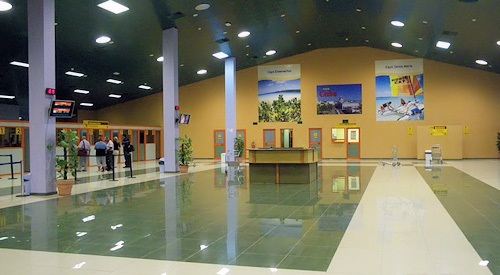 The Abel Santamaria airport (Aeropuerto Abel Santamaria) is a small-size international airport located near the city of Santa Clara which is the capital city of the Villa Clara province in Cuba. It’s names in memory of Abel Santamaria Cuadrado (1927-1953) who was an important leader in the Cuban Revolutionary movement.

It’s a small aiport with limited facilities. Remodeling and expansion of the airport was made in 2008 to be able to receive three times more passengers. The airport is also home to Mig-23BN fighters of the 14th Tactical Regiment of the Cuban Revolutionary Armed Forces, as well as helipads of military helicopters. The terminal building is air-conditioned and non-smoking expect in one designated area. There’s no jet bridge, mobile staircases are used for embarking and disembarking passengers onto the tarmac.

The Santa Clara airport has only one terminal which handles international and domestic flights. It serves mainly the popular resort destination of Cayo Santa Maria and Cayo Ensenachos and also the city of Santa Clara and the central part of Cuba.

Details about this review
0 people like this
Airports, Caribbean & Central America
CubaSanta Clara