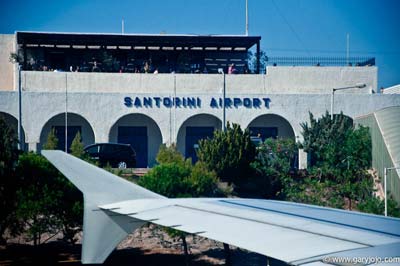 The Santorini Airport serves both as a military and as a civil airport. With its relatively small apron, the airport is only able to serve up to 6 civilian planes at the same time. The tower (freq. 118.05) also serves as approach / departure, up to FL170.
Santorini Airport viewed from Ancient Thera

Santorini is one of the few Cyclades Islands with a major airport. It is about 6 km southeast of downtown Thira. The main asphalt runway (16L-34R) is 6972 feet/2125m in length. The parallel taxiway was built to runway specification (16R-34L). It can accommodate Boeing 757, Boeing 737, Airbus 320 series, Avro RJ, Fokker 70, and ATR 72. Scheduled airlines include Olympic Air and Aegean Airlines, with chartered flights from other airlines during the summer. Transportation to and from the air terminal is through buses, taxis, hotel car-pickups and rental cars.

Details about this review
0 people like this
Airports, Europe
GreeceKamari

Rhodes Island Airport Reviews
Be the first to comment!
Leave a reply »