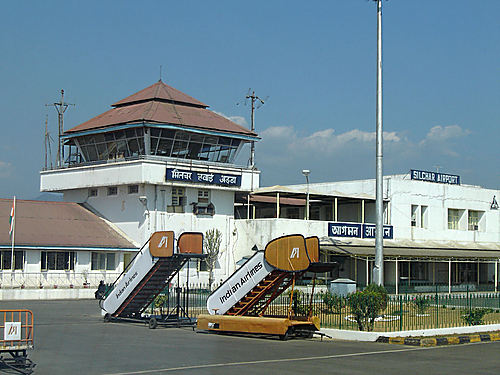 Silchar Airport (IATA: IXS, ICAO: VEKU) is located in Silchar in the state of Assam, India built by the British in 1944 and is also a Civil enclave airport as it is under the control of Indian Air Force.

Silchar Airport is situated on the foothills of the Barail range. It is the fourth busiest airport of the north-eastern India next to Guwahati, Agartala and Imphal. Silchar Airport handles about 230,000 passengers yearly. Approximately 30 flights per week depart from the Silchar Airport for cities like Imphal, Guwahati, Kolkata, Jorhat and Agartala. It is equipped with Instrument Landing System and Night landing facility. Plans are on to set up a new integrated terminal which would facilitate modern passenger comfort and accommodate more passengers.Night Landing Facility is soon to be made available which would enable many other airlines to operate to/from silchar.

The Silchar Airport area is surrounded by tea gardens, so one can enjoy a nice and a clear view of those tea gardens during take off and landing. On 15 March 2003 Indian Airlines (now Air India) started using ATR 42-320 (operated by Alliance Air) aircraft to Kolkata, Imphal and Guwahati routes. After a long wait for many years the runway and apron extension work finally get completed on August 2007 and then the last Boeing 737-200 flight that took off to Kolkata was on 2 September 2007 which was operated by Alliance Air (present name Air India Regional) and Air India started operating Airbus A320 to Kolkata on the next day as the older Boeing 737 aircraft were not in safety zone in terms of flying purpose. On May 2011 JetKonnect a subsidiary company of Jet Airways introduced daily flights on Kolkata and Guwahati routes using ATR 72 aircraft.

Silchar airport is situated at an elevation of 338 feet above the sea level. It covers the land area of 36.70 Acres. There is only one domestic terminal at Silchar airport and is equipped with modern facilities for the passengers.

Details about this review
0 people like this
Airports, Asia
AssamIndiaKumbhirgramSilchar

Bengaluru Airport Reviews
Be the first to comment!
Leave a reply »