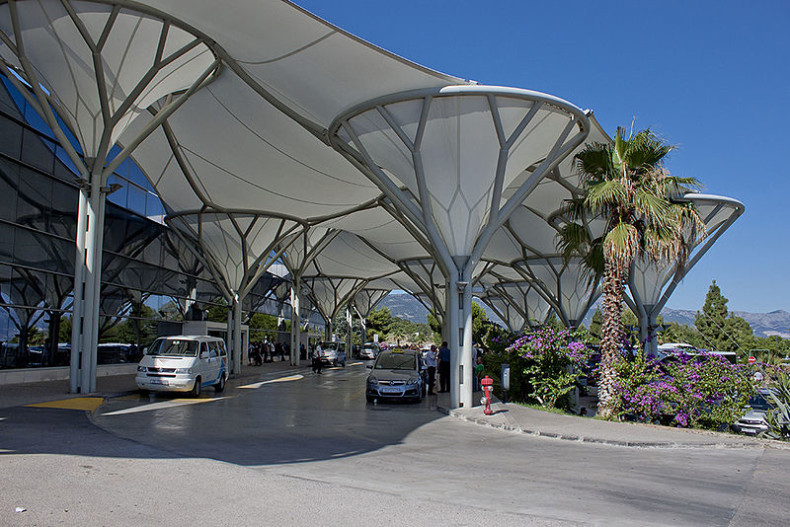 Split Airport (IATA: SPU, ICAO: LDSP; Croatian: Zračna luka Split), also known as Resnik Airport (Zračna luka Resnik), is the airport serving the city of Split, Croatia. It is located 24 km (15 mi) from Split, on west side of Kaštela Bay, in the town of Kaštela, and extending into the adjacent town of Trogir.

The Split Airport follows Zagreb Airport and has surpassed Dubrovnik Airport in 2013 as the second busiest airport in Croatia handling 1,581,734 passengers that year. It is an important hub for Croatia Airlines offering flights to European cities, such as London, Amsterdam, Frankfurt, Rome, Paris and many others. Split first commercial route was opened in 1931 by the Yugoslav airline Aeroput which linked Zagreb with Belgrade trough Rijeka, Split and Sarajevo, and maintained this route until the start of the Second World War. In 2005 terminal got a major facelift, adding one more gate, the glass facade, as well as the steel/fabric palms illuminated by multi-color LEDs. The bussiest time in the airport is during summer season, as the city of Split is a large tourist destination and very important transportation hub. Saturdays are the busiest days of the week, with more than 200 airplane operations and 25,000 passengers.

Airplane spotting is a popular activity at Split Airport. Glide-path to the runway 05 leads just above the old city of Trogir, making its seaside promenade a great place airplane spotting. Visual approach to runway 23 is attractive in another way.

Details about this review
0 people like this
Airports, Europe
CroatiaKaštelaSplit