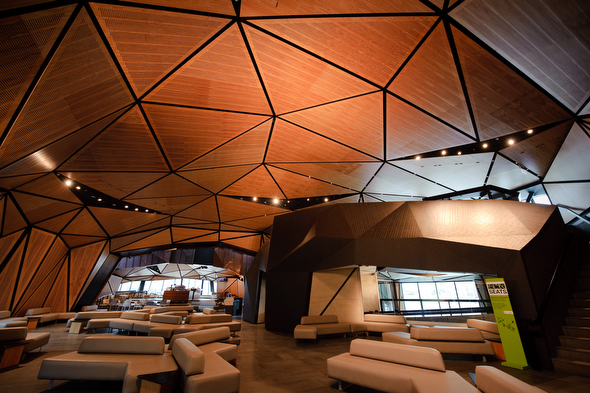 Wellington Airport is the third-busiest airport in New Zealand (after Auckland and Christchurch) handling a total of 5,134,230 passengers in the year ending 31 March 2011. The airport, in addition to linking many New Zealand destinations with national and regional carriers, also has links to major cities in eastern Australia. It is the home of some smaller general aviation businesses, including Wellington Aero Club, which operates from the general aviation area on the western side of the runway.

The Wellington Airport is on a small 110-hectare (270-acre)site on the Rongotai isthmus, a stretch of low-lying land between Wellington proper and the Miramar Peninsula. It operates a single 2,081-metre (6,827 ft) runway with ILS in both directions, capable of handling aircraft up to the Boeing 767-300 and Airbus A330-200 (although the largest aircraft to use Wellington in regular service in 2013 are the Airbus A320 and the Boeing 737-800). The airport is bordered by residential and commercial areas to the east and west, and Wellington Harbor and Cook Strait to the north and south respectively.

Wellington Airport has a reputation of having rough and turbulent landings, even in larger aircraft, due to the channeling effect of Cook Strait creating strong and gusty wind conditions.

Cash Machines – Locations: in the area between the check-in and the food court, near Fuel in the South West Pier, opposite the International Departures on Level 1 and another on Level 0, and in the South West Pier – Gate 10.
Children’s Play Areas – Location: The Rock, International Terminal, Airside
Currency Exchange – Travelex Money Exchange is located in the Main Terminal Building, Level 1.
Food – There are no 24 hour food and drink concessions at this airport.
Billie Chu • Cafe Arome • Cook Strait Bar • Curry Capital • Donut King • Fresh Bites • Mojo • Orb Coffee • Red Rocks • Subway • Wishbone
Car Rentals – Avis • Budget • Europcar • Hertz • Thrifty. Location: Level 0 of the main terminal
Information Desk – info not available
Luggage Storage – Location: Baggage Claim, Level 0. Rates: from $5 (1 item up to 12 hours) to $35 (5 items up to 35 hours)
Showers – not available
Internet – Free WiFi is available at the Wellington Airport. Connect to the “Wild at Heart” network.

Airport opening hours:
Officially the airport is open from 3:30am – 1:30am daily. The airport now states that terminal is closed between 130am and 400am.

Details about this review
0 people like this
Airports, South Pacific
South PacificWellington

Perth Airport Reviews
Be the first to comment!
Leave a reply »