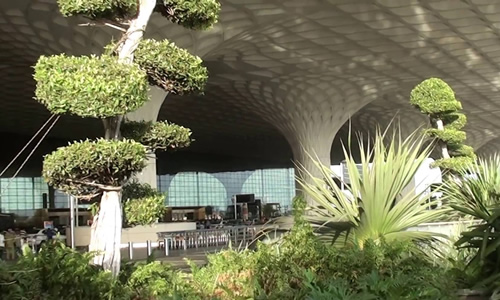 Splendid Airport Gardens in the World

Nature has a power to revitalize any tired soul whether it is an office-goer tired after a hectic day’s work or a passenger in a long-haul flight. And this has been correctly identified by the authorities of some of the world’s busiest airports who have created amazing gardens, with fresh air, sweetly chirping birds, aroma of flowers and space to move and relax, in their premises to soothe weary travelers.

Changi Airport of Singapore is famous for presenting travelers with multiple natural settings in form of various gardens, which are ideal for spending some relaxing moments.

Terminal 3 has got a tropical butterfly garden in the lounge on level 2. Its butterflies are certainly beautiful, but even more popular are the 200 carnivorous plants. The outdoor terrace of the Budget Terminal has a fragrant plant garden and Terminal 1 flaunts a cactus garden having species from Africa and the Americas. Terminal 2 boasts of 2 koi ponds among gardens of ferns and orchids. This terminal also has a sunflower garden on level 3 lounge which turns into a flabbergasting light show at night, complete with glittering lights resembling fireflies.

South Korea’s main airport, Incheon International Airport has a star attraction in form of its Stargarden. It comprises of two tunnel-like souring rooms made from glass and steel, laid out proficiently with seven themed gardens which have species native to Korea and its Jeju Island. These gardens have over 9,000 plants altogether, dotted with splendid waterfalls and soothing fountains.

The gardens can be toured also along a modern broadwalk, just outside the AREX train station at the Main Terminal.

You may not call it ideally a park, but it is created for the same purpose. It is a 20,000-square-foot space in Amsterdam’s Schiphol Airport and presents a park setting with faux trees, log benches, wooden picnic tables, “Ivy”-fabric upholstered chairs and a soundtrack of birds chirping and kids playing.

You are not allowed to take an actual bike ride in the park, but you can pretend one with a stationary bike. And guess what you get! The bike generates energy with which you can charge your MP3 player or mobile phone!

And if you want some real greenery, the airport gives you that too. The Airport Park in Lounge 1 has real plants and trees.

At Honolulu Airport you get a wonderful experience to stroll in Chinese, Japanese and the local Hawaiian gardens which have been created to commemorate the respective cultures. All the three gardens are outside the Main Terminal and waterways connect them to signify the “intermingling” of the three societies in the island state.

The Chinese Garden is complete with a beautiful yellow-tile-roof pavilion, an arched bridge and lily-pad-covered goldfish ponds. The Japanese Garden features a shingle-roofed pavilion, sculpted weeping willow trees, a pagoda and a zigzag walkway and bridge, while the lush green Hawaiian Garden is full of banana and coconut trees, unusual and interesting flowers and fiery luau torches at night.

The Terminal 3 of Jerusalem’s Ben Gurion International Airport boasts of an award-winning garden designed by architects who were honored by the American Society of Landscape Architects for its creation. The garden is not lush by any means and features picture wheat-colored grass, carefully lined citrus groves, concrete trails and stainless steel “ocean waves” running across plains of river pebbles. It has been converted from an original parking garage.

Chicago’s O’Hare International Airport flaunts the outstanding Aeroponic Urban Garden, a vertical garden between Terminals 2 and 3 having almost four dozen various types of vegetables and herbs, a garden first of its kinds in the world.

The garden features a special process called aeroponics which features 8-foot long cylinders filled with a solution of water and minerals and special lights which help plants thrive. The water is recycled through a high-tech system.

And you might be wondering what happens with the lettuce, Swiss chard and other goodies grown here. They are used in the kitchens of several airport restaurants. Good and health-giving self-dependence, isn’t it?

Keeping Children Entertained at Airports
Be the first to comment!
Leave a reply »