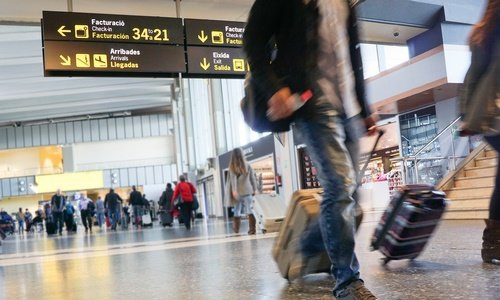 Excellent Airport Restaurants in the World

If you are returning from an exciting holiday, nothing can spoil it more than a bad-tasting bite wrapped in a greasy paper sack nibbled while waiting in the waiting lounge of an airport. Why to spoil a superb vacation with such a meal, when there can be some excellent options? Following are five restaurants at international airports which are worth a splurge and trekking from other terminals. They not only serve really tasty food, but also offer the much desired refuge from the hubbub of a huge international airport. Note that all of them are beyond security checkpoints, thus enabling only ticketed passengers to dine there.

(In the Crown Pizza Hotel linked to the airport)

Crown Pizza connected to Terminal 3 is hard to overlook with its silvery, shining, latticed exterior. It houses a handful of eateries and lounges, among which Imperial Treasure is perhaps the most remarkable because of its roast goose, fresh fish and in general extensive, reputable Cantonese menu.

Though the restaurant is apparently Western-style, it is quintessentially a Chinese hotel, with big round tables and traditionally dressed waiters. The tables are perfect for large parties wherein deep-fried prawns full of wasabi sauce or a bowl of salted fish fried rice can be shared.

This restaurant should be approached for a comforting bowl of boiled dumplings before a long international flight. Tian Xia is famous for its yummy assortment of soups, noodles and dumplings in a Hong Kong street food style.

Celebrity chef Gordon Ramsay’s first airport eatery Plane Food is an airy, tastefully designed restaurant with big picture windows offering live action views on the runway. It is much better to wait in the bar of this hotel which overlooks its open kitchen, than waiting near your gate.

The eclectic menu consists of salads, steaks, risotto, pasta and a range of fish dishes. If you are short of time, order from four different starters, entrees and desserts. Make your seatmates envy in-flight by finishing with pear cheesecake tart with caramel. Reservation is recommended.

Actually famous as one of the best airport bars, Bubbles actually serves some surprisingly fresh and extremely tasty seafood. Succulent fat oysters sitting in half shells and the traditional Dutch raw herring with pickles and onions are the must-try specialties of this restaurant.

As the name of the restaurant suggests, you get a huge selection of bubbly (Champagne) and dozens of other beverages at the bar. To entertain your eyes, there is a gigantic saltwater aquarium housing exotic fish. If you get a seat beside the aquarium, the eating experience will become even more wonderful.

And there is one more surprise! A casino right inside the restaurant – take care not to miss your flight because of getting lost in roulette.

(Inside the Theme Building)

This upscale Californian cuisine restaurant is housed in the retro Theme Building, resembling a flying saucer, in the center of the airport, since 1997. Its décor is also intergalactic enough with its design created by the inventive gurus from Walt Disney Imagineering. What’s more, you get to see a 360-degree view of the LAX action from the wraparound windows.

Best Airport Gardens
Be the first to comment!
Leave a reply »