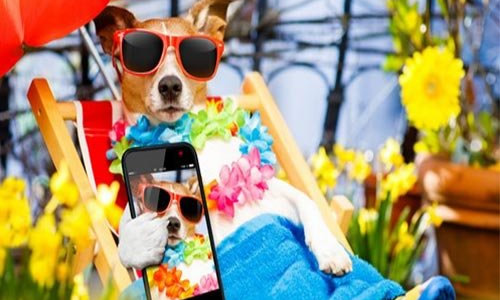 Their job is to be touched, listen, offer a belly to rub or a paw to shake, and not to search for bombs or drugs! These are Therapy Dogs at airports of the US, Canada and Puerto Rico. They work for some hours a week at airports, where volunteers stand with them and answer for them if needed, but as if they are at the end of the dog’s leash and not the dog at the end of theirs!

The dogs are made to work for taking the stress of travelers – of the crowds, long queues and fear of terrorism.

Heidi Huebner, the director of volunteers at LAX, says people are literally taken off stress, they start smiling, strangers begin talking to one another and everyone walks away with a really, really good feeling.

Wyoming-based Therapy Dogs, Inc. certifies the LAX animals. The executive director Billie Smith says that the dogs should be healthy, competent, well-mannered, stable and able to work on a slack 4-foot leash. They should be comfortable with sounds, crowds and smells, and they should be able to pass through security in the same way as airport workers do.

Handlers are trained to watch for passengers, who dislike or are afraid of dogs, or those having allergies. In many cases, passengers approach dogs, identifying them with their vests or bandannas.

Los Angles Airport’s dogs are featured on trading cards and are quite varied. There are a Lab-pointer mix, a long-haired Dalmatian, a poodle, a Doberman, a field spaniel, a 150-pound Irish wolfhound called Finn and three Australian Labradoodles. Finn has two tricks, his owner Brian Valente says, he looks in your eyes and lays down, and when you are around him, you feel everything is OK.

Miami’s sole dog Casey is a 4-year golden retriever and is a very special one, with her own website, business cards, fan mail and a role in “Airport 24/7 Miami” which is a weekly reality show aired on the Travel Channel. According to Dickie Davis, director of customer service and terminal operations, Casey is so genuine and pure; she doesn’t ask for anything or sell anything, she is only a love magnet.

The experience of Claudia McCaskill and her 5-year old autistic daughter Carina with Casey is very touchy. Casey and her handler Liz Miller met Carina with a gift basket and Carina immediately fell in love with Casey. McCaskill has said that she is unable to appreciate in words what they did, which not only helped their daughter, but to them too.

People shower all sorts of emotions on the dogs! Soldiers tell them to take care of the house, while women tell them about their sad marriages and weep. The dogs just sit and feel it!

Best Airport Gardens
Be the first to comment!
Leave a reply »